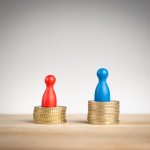 Since the publication of the BBC’s top earners last year highlighted the organisation’s staggering pay gap between the wages of its highest earning men and women, the gender pay gap across all industries has continued to dominate headlines.

Recently, it was reported that supermarket giant, Tesco, was facing a record £4bn equal pay claim. Despite the company saying it works hard to ensure all staff are paid “fairly and equally”, lawyers claimed that hourly paid female store staff earn less than men for comparable work.

According to reports, thousands of women working for the company could receive back pay of around £20,000 if the legal challenge is successful. Similar actions have also been brought against its supermarket rivals, Asda and Sainsbury’s.

Birmingham City Council is also liable for over £1bn in payments after settling an equal pay claim from women whose pay was also less than that of men in comparable jobs.

Recent findings from the Office of National Statistics (ONS) suggested that the gender pay gap was “entirely in favour of men” across every occupation, while pay differences are smaller at younger ages, but increase from 40 years old, onwards.

However, this may not necessarily indicate a gender bias, but rather the fact that, statistically, women are more likely to take time off to look after children. The research suggested that these career ‘breaks’ could be attributed to the increased pay gap for older women as their pay was shown to grow less and at a slower rate to men.

In response to the headlines and the findings, new legislation introduced this year aims to encourage and support action among employers to improve gender equality and reduce or eliminate the pay gap within their organisation.

Under the legislation, organisations with more than 250 employees have until Wednesday 4 April 2018 (or Friday 30 March 2018 for public sector employers) to provide an annual return of the difference between the pay of their male and female employees, highlighting any potential gender pay gaps among staff.

The information must be published on both the organisation’s and government’s website, making it accessible to all. This means the gender pay gap will be publicly available to people such as customers, employees and potential future recruits.

As a result, employers should consider taking new or faster actions to reduce or eliminate their gender pay gaps.

As part of the report, employers must calculate and publish:

The calculations have to be published as percentages and include the difference between the average of salaries. Alongside this information, employers can also choose to add a narrative explaining the gap/results and what actions they plan to take to resolve the situation.

Under the Equality Act 2010, it is unlawful to pay people unequally because of their gender, however if a workforce has a particularly high gender pay gap, this can indicate a number of potential issues to deal with. The individual calculations, which are a requirement of the reporting, may help to identify what the issues are.

Within certain industries, the gaps will appear larger. For example, in an industry such as construction, there tends to be a greater number of male employees compared to some support functions, like HR or marketing, which traditionally have more female employees.

Likewise, specific roles can, on average, often be filled by men rather women, such as leadership roles.

As previously mentioned, women often take time out of work for child care. As a result, many then return to work on a part-time basis, which highlights another gap as each part-time employee is classed as one full employee when it comes to reporting the pay of each and every employee.

This issue may well be addressed in the employer’s accompanying narrative, if applicable.

Many employers may well already be making steps to improve equality and reduce the gender pay gap within their organisation. It is hoped the transparency of the reporting will increase the chances of positive action being taken in organisations across all sectors to reduce the gap and to support those who are already taking such action.

Janice Haddon is founder and MD of Morgan Redwood

NEXT ARTICLE →
How do we solve the NHS skills crisis?

← PREVIOUS ARTICLE
It’s time for a transparent talk about pay