Apprenticeships back in the spotlight 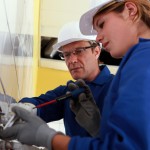 Eighteenth months since its imposition in April 2017, the government is now reviewing its flagship apprenticeship policy and associated levy.

At the Conservatives’ recent annual conference, Chancellor Phillip Hammond announced plans to invest some £125m new funding into jobs and apprenticeships, focusing on the sciences, technology, engineering and mathematics, or STEM subjects.

The government will also allow large companies to transfer funding for apprenticeships to smaller firms in a bid to create more high-quality training places, introducing new flexibility into the way the levy can be spent.

The government’s apprenticeships policy has not been without controversy, and since its inception has been widely criticised in its practical application. Reports refer to low take up of apprenticeships, employers being deterred from using it because of the complexities that are in built together with the additional cost.

From the perspective of recruitment agencies, those with a payroll exceeding £3m must pay a 0.5% charge on the excess. This can amount to a significant sum, yet while there are some training courses available, the majority have difficulty in identifying courses that are genuinely valuable to the agency’s own workforce and commercial objectives.

Adrian Marlowe, chairman of the recruitment trade association The Association of Recruitment Consultancies (ARC):
“It is true that some employers will be clients of the levied agencies, and thus they may get some return. However, there is a serious disconnect. There is no way that an employer could know whether an agency has contributed to the fund, other than in general terms. When hiring a worker from an agency the agency fee charge does not transparently reflect any element paid by the agency into the fund as there is no obligation on the hirer to make a levy payment for agency workers. So even if the agency in practice adds the levy charge into its overall fee, the hirer does not know that and in any event, importantly, cannot claim credit for it.

“Further, whilst agencies may want to discuss apprenticeships with the employer by reference to the levy, explaining how the scheme works, how much the agency is contributing to help the employer, advocating the take up of apprenticeships, they do not do so. Instead agencies rightly see themselves as carrying the burden without receiving the benefit available to other employers. The government has therefore denied itself the potential of a great source of support for the scheme.”
ARC has argued that the disconnect can be remedied by allowing agencies to charge their hirers for the levy sum on each hire, in the same transparent way as agencies charge for VAT.
Adrian explained: “If the hirer pays the levy because its payroll exceeds £3m it could, if it chooses to with an agreeable client, set the payment off, working in the same way as VAT. This would be a selling point for the agency by specific reference to apprenticeship. It is after all employees of the hirer who would use and benefit from the apprenticeship scheme. The consequent discussion would highlight the scheme and its benefits, utilise the funding better at little or no cost to the hirer. Agencies need not charge the levy on to hirers who have payroll of less than £3m.”