The gig economy is gearing up: so let’s protect workers 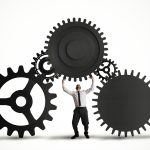 It’s arguably one of the most seismic shifts in the way we work for a generation.

Experts suggest that the proportion of workers who are self-employed, freelance or on flexible contracts could be as much as half of the workforce by the end of the decade. The days of having a job for life feel like they were part of the history books.

We already consume the ‘gig economy’ in our everyday lives as users of Uber or when we order from companies such as Deliveroo. Many workers, particularly in the creative and technology sectors, prefer the freedom of being their own boss to traditional employment arrangements.

However, it’s fair to say that the structures that support this more fluid jobs market have struggled to keep pace – which is why an independent review has been set up by the Social Market Foundation to look at gig economy and contracting employment models.

The SMF will look closely at whether a tax system that still only recognises workers as either ‘employed’ or ‘self-employed’ is fit for purpose, and how benefit structures and employment rights should look in this new world of work.

There’s no denying that the lines are blurring. A number of Uber drivers took a case to employment tribunal this summer claiming they were being denied basic employment rights such as time off and holiday pay – while Uber claimed they were not direct employees, they simply used the platform to gain work for themselves.

At the same time, the Government is cracking down on employers forcing individuals to work as contractors with self-employed status, so they can avoid the national insurance and tax liabilities being an employer entails – despite the fact many of these people work the same hours and carry out the same work as full-time, permanent colleagues.

As the work environment becomes more fragmented and less stable, self-employed workers need support mechanisms in place, and reviews such as this will help to identify what those mechanisms should be. There are undoubtedly positives to a more flexible labour force too, so protecting the future of the ‘gig economy’, rather than allowing employers to exploit it or create chaos, is of paramount importance.

NEXT ARTICLE →
Back to school: time to channel that New Year feeling?

← PREVIOUS ARTICLE
Focus on what’s important in the recruitment process