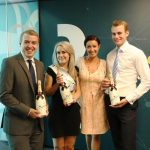 ReThink Recruitment has recently promoted 11 members of its team across several of its UK offices.

Five of the promotions took place in ReThink’s Manchester office, where colleague Ben Bargh has achieved promotion to Senior Recruitment Consultant having been with the business for less than six months.

Three further promotions were made in Bristol, where colleague Alex Franklin has enjoyed his second promotion in just six months, joining his colleagues Charlie Passmore and Kris Connabeer, promoted to Recruitment Executive and Senior Resourcer, respectively.

Meanwhile, London-based Sam Wellalage has achieved promotion after focusing his market on Ruby on Rails software. His London colleague Mark McDaid, who has been with ReThink since May 2014, and Birmingham-based Kelly Goddard, have also both enjoyed promotions.

COO Andy Lord explained: “We place a strong emphasis on personal development and career progression across our business, investing around £150k per year on training and helping people fulfil their real potential.

“These promotions demonstrate how committed we are to giving our people the tools that will help them flourish. I would like to congratulate them and their regional directors who have followed our mantra and helped them reach the next level of their careers.”

ReThink Recruitment, which is part of the Rethink Group, fulfils resourcing needs across all industry sectors. Established in 2005, it has established a solid reputation for delivering first-class talent management and recruitment services, last year turning over £130m.