Loading...
You are here:  Home  >  People  >  Promotions at growing IT recruitment firm

Promotions at growing IT recruitment firm 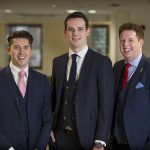 Cathcart Associates has announced three senior promotions within its Scotland and North of England divisions.

The promotions follow recent news of expansion by the independent IT recruitment business in its Manchester office and the creation of a dedicated training programme for graduate recruits.

Stuart Manderson has been promoted to sales manager, managing the whole UK IT business. His responsibilities will include setting consultant targets, recruiting and developing new trainees, carrying out reviews of all UK-based IT staff and attending board meetings. Manderson, who has been with Cathcart for six years, is also account manager for some of its biggest customers, and was the first employee to bill over £1 million for the company.

After four years with the business, Murray Simpson has been made Scotland team leader. His new role will see him specialising in the sourcing and placement of senior IT professionals while leading the team of recruiters in Scotland.

In his new position as senior consultant for the north of England, Liam Wilson will be responsible for high-level business development for major clients in the area. He will continue to be Cathcart’s specialist in the fields of business intelligence, data science and artificial intelligence. Liam started the north of England team single-handedly and has so far grown it to seven consultants.

Gordon Kaye, founder and director at Cathcart Associates, said: “Scotland and Manchester are hotbeds for growth and development in the tech industry right now and we are seeing this reflected directly in demand for our services.

“Cathcart specialises in recruitment for IT businesses and customer service is at the forefront of who we are. We are very pleased to announce the promotion of three members of our team who have delivered outstanding results in terms of the service we offer our clients and candidates and who have the skills and commitment to support the growth of the business.”

Cathcart was founded in 2009 in Edinburgh by Gordon Kaye and Sam Wason, and opened its Manchester and Bangkok offices two years ago. The company projects 100% increase in turnover year on year over the next three years in its Manchester division, taking revenue in its Manchester office to over £4 million by 2020.  Headcount is expected to double over the same time frame.