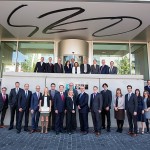 Interim and executive recruitment company Executives Online has announced a number of changes to its senior ranks.

The changes have been made in preparation for the company’s next phase of strategic growth, and were announced following its recent annual conference in Cologne.

Andrew Nicholas – previously a director – becomes chief executive officer, while James O’Brien takes on the role of chief operating officer. Both were instrumental in leading the management buyout of the company in 2012.

Andrew MacAskill, previously associate director, has been promoted to commercial director. He will oversee the company’s new Winchester-based business, which specializes in finance, C-suite, private equity, HR, interim and procurement roles, as well as manufacturing.

Nicholas said: “It is a privilege to be leading the company into the new financial year which promises to be very exciting. We have been working hard to shape the future of the company and the structure we now have in place builds upon the solid foundations we have already laid down for further development.”