The apprenticeship levy: Where are we now? 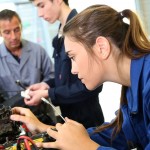 The introduction of the apprenticeship levy earlier in the year was not without controversy.

Opponents of the scheme derided it as yet another tax on business, at the same time as organisations were wrestling with the added costs of minimum wage rises and auto-enrolment. The recruitment sector felt particularly hard hit, on account of the crude means of calculating who qualified for the scheme, basing it purely on turnover, rather than headcount.

Although it’s still early days, the signs, however, are that businesses are now looking to find ways to use it to their advantage, investing in apprenticeships and training rather than handing over cash to the government. A survey of over 3,000 HR directors by Alexander Mann Solutions found 52% were planning to use the funds to bring onboard new talent, and 71% saw the levy as a means of creating a new route into the workforce, to rival graduate intake.

“Our research suggests that HR teams are making the funding fit individual talent development strategies, rather than doing something differently because that’s what the funding suggests they can do more easily,” says Tim Campbell, head of client services, emerging talent at Alexander Mann Solutions. “While every single organisation we spoke to had, perhaps unsurprisingly, calculated how many additional apprenticeships they would need to create in order to recoup the whole of their levy payment, all said that any growth in provision would be linked to strategic business needs rather than a blind pursuit of financial ROI. This may not necessarily be achieved through investing in expanding headcount, but by upskilling existing employees.”

Ruth South, head of graduate, apprentice and placement programmes at Capgemini, also says employers are starting to think differently about their workforce planning in the wake of the introduction of the levy. “It’s brought the question of hiring graduates versus apprentices to the forefront of people’s thinking and is making more businesses consider apprenticeships as an option for developing their future workforces,” she says. “The levy has also focused minds on the types of skills they should be looking to build.”

Engineering firm MTR Crossrail is one example, having identified a number of new apprenticeship frameworks and standards in areas such as finance, HR and project management, as well as specific rail standards, in addition to its existing schemes. It’s also applied to become an apprenticeship training provider itself, which would enable it to train its own employees under the scheme.

“I think the levy needs to be in place for at least a year to be able to review the impact it has had on employers,” says Paul Siniecki, strategic labour needs and training manager at MTR Crossrail. “Once employers become comfortable with the levy, I think we will see them becoming more strategic about how they will spend funding and will be looking to develop internal training and development programmes as an apprenticeship.”

Potential recruits are also becoming more aware of the apprenticeship route, although this trend was already evident before its introduction, says Matthew Harradine, director of Totaljobs. “The increase in university fees led this charge and, although we haven’t witnessed a decline in university applicants, it certainly made employers think about the best routes to attracting entry-level talent into their businesses,” he says. Totaljobs’ research suggests 36% of people looking to enter the workforce in the next five years would consider an apprenticeship, with half of these looking at degree apprenticeships.

South, though, believes the full impact has yet to be felt in terms of numbers of people taking up apprenticeships. “There are understandable reasons for this,” she says. “Businesses have two years to spend the levy so many are taking the time to reflect on how to make the money work for them rather than spending it immediately. The landscape is changing constantly, so many business decision-makers are thinking about the long game when it comes to the levy.”

One interesting consequence could be greater opportunities for those from under-represented groups, according to Alexander Mann Solutions’ research. “The majority of contributors agreed that the new round of apprenticeships have the potential to tap into under-utilised pools of talent and consequently generate significant workplace diversity benefits,” says Campbell.

The levy, though, has had consequences for recruitment agencies, many of which have found themselves qualifying to pay despite being relatively small employers. “Fears that medium-sized agencies and umbrella firms could be unfairly impacted have been realised,” says Julia Kermode, chief executive of trade association The Freelancer & Contractor Services Association (FCSA). “In order to reach the £3m payroll turnover, a company only needs the equivalent of 100 people earning £30,000 full-time, which is the combined total of a company’s own head office staff plus temps and umbrella employees on assignment. This is a relatively modest number for recruitment agencies and umbrellas, depending on the sector they work in.”

At the same time, many recruiters have been unable to benefit in terms of training staff – or those of their clients – on account of the criteria specified under the legislation. “Agency workers in particular are not able to benefit, and we’ve called for the levy to be broadened out so that everyone has the opportunity to upskill and develop,” says Karen O’Reilly, stakeholder engagement manager at the REC.

“We were really pleased to see that the Taylor review recommended that the levy be looked at again so that it works better for non-permanent workers. We believe that apprenticeship levy payments made by employment businesses should be used to create a specific fund to support the training of agency workers.”

Recruitment firm Meridian is currently working its way through the rules to see if it can use the levy, rather than treat it as an additional tax. “But the vast majority of courses we use to develop our staff are short-term so don’t meet the levy criteria,” says Jeanette Barrowcliffe, finance director at Meridian Business Support. “We’ve also had the issue of finding levy-accredited training courses, and then there’s the 20% off-the-job training; the best training is on the job, so why should it matter where the training takes place? For temps, we’ve just accepted it’s another tax and increased our fees to clients to endeavour to cover the extra cost.”

For those who are able to make use of the levy, though, there could be an opportunity to look again at the development of current staff, as well as new hires, says Ann Swain, chief executive of APSCo. “The introduction of the apprenticeship levy offers the opportunity to raise the bar on skills within the professional recruitment sector,” she says.

“The recruiters we work with are already taking the time to look at learning and development requirements and establish what could fall within the structure of an apprenticeship, perhaps by revisiting what training has been put off because of the possible cost and ascertaining if this can be completed under the scheme so that they can reap the best value.”

NEXT ARTICLE →
Can an algorithm replace a recruiter?