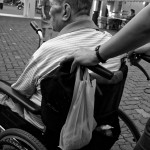 While many workplaces have long established support mechanisms for parents, research by the CIPD this week shows that only around a third have any policies in place to support working carers.

This is despite the fact that research suggests that three in five people will end up caring for someone – whether that’s an elderly relative or a disabled child – at some point in their lives.

Those organisations that do offer structured support say they feel it is the right thing to do, that it improves work-life balance and reduces absenteeism, so why aren’t others following suit? In the private sector, only a fifth even know how many working carers they employ.

In an increasingly multi-generational workplace, where people are working longer rather than winding down at a time when they might find space to look after ailing older relatives, employers really need to get on top of this if they are to retain good staff. At the same time, there needs to be a more open culture on caring where those with these responsibilities feel they can open up about the challenges they face. The research found that many felt they might be treated differently if they reduced their hours or worked in a more flexible way, or that it might impact on their career progression.

As the CIPD points out, employers need to open up these channels and positively promote channels and initiatives that support carers, just as many do with their childcare or maternity support schemes.

Some employers even go as far as offering access to organisations that can support employees with professional carers if something important crops up at work, and this is a valued perk. While not every employer will have the resources to offer this level of support, it’s time to equip line managers to be open with their teams on caring responsibilities.

After all, if an employee feels secure in the knowledge that they are able to put a family member first – and still finish the project they’re working on later, or wind down their responsibilities for a while without damaging their career prospects – they are far more likely to value that employer over another that takes a more negative view.

NEXT ARTICLE →
Moonlighting: the way of the future or a necessary evil?

← PREVIOUS ARTICLE
What to do about pre-Brexit wobbles?