From social mobility to City culture change: recruiters can play a part 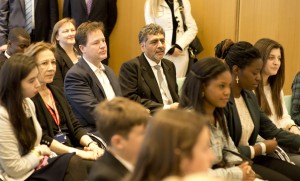 If they read some of the press about recruiters over the years, someone from outside of the industry would probably think consultants and their bosses were money-grabbing, self-absorbed opportunists only after a quick buck.

So it’s great to dispel that myth this week with news that recruiters are going to play a major part in the Government’s new social mobility drive, Opening Doors.

Research released to accompany the launch has highlighted how these candidates tend to have less success in gaining a job in their chosen field compared to those from higher social grades, so getting involved in promoting greater social mobility could really make a difference.

Neil Morrison, HR director of publishing company Random House (one of the companies to sign up to the scheme), puts it succinctly in his blog. He says:  “I don’t care what your politics are, the issue of social mobility and talent management are intrinsically linked. And Opening Doors is trying to change the way that we, in business, do things to open up opportunities for young people regardless of their backgrounds.”

It’s not just about giving something back, either. Opening up access to roles for a greater section of society means recruiters can tap into a much wider pool of talent, and a broader set of skills than those residing in the Old Boys’ Network. If you’re interested in signing up, visit the link here.

There was more positive news this week, with figures from global recruitment company Antal International indicating that the UK jobs market is slowly returning to health. The fact that the most movement seems to come from senior roles suggests that companies are building up their executive teams for growth, which can only be a good thing.

However, one area where there is still work to be done is in financial services. There is still some way to go to rebuild trust and overcome short termism in the City, a CIPD report launched this week has found. Shockingly, almost two thirds of all workers in the sector believe some people in their organisation are rewarded in a way that incentivises inappropriate behaviour, and only one in three (outside senior managers) are proud to work there.

Trust cannot be rebuilt overnight, but recruiters could play a role in helping to define expectations for new staff, as well as helping City employers develop healthier, less reward-focused cultures and change perceptions of the sector as a whole.

NEXT ARTICLE →
So many candidates, but few hit the bullseye

← PREVIOUS ARTICLE
From data to dating: the week in recruitment