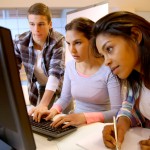 The main reasons for school students not entering further education is wanting to earn money straight away, followed by not wishing to get into debt, according to the trendence School Leaver Study.

However, the report revealed that university-bound students focused on longer term career aspects, such as needing to get a qualification for their hopeful future vocation and believing that attending higher education would ensure a ‘better’ job. Research showed that for university-bound students the recent increase in tuition fees had little impact on this decision.

“What is immediately noticeable in our findings is that the core drivers behind the decision-making process of work-bound students and university-bound students are completely different,” said David Palmer, trendence UK research manager.

“Companies offering work-based training or apprenticeships may do well to focus on students’ financial concerns, whereas universities and similar higher education institutes could do better by speaking to their career ambitions.”

The survey also looked closely into the thoughts and habits of pupils intending to go straight into work − 16% of those interviewed overall. Of those considering going directly into work, the majority (65%) were male, while science was the third highest career path for both men and women, with IT/telecoms and engineering being the preferred options for men, and healthcare and teaching being the top choices for women.

There has also been a 38% rise in the use of online careers websites for school leavers. Facebook is the most popular social media platform for finding career opportunities, with the majority (69%) of respondents using the site. Scotland, Wales and Northern Ireland were all high-mobility areas, whereas the West Midlands, Yorkshire and the South East of England saw fewer instances of students wanting/needing to leave the region to find a suitable job. Meanwhile, 97% of those going straight into a career were from state schools, compared to just 3% that were from independent (ie fee-paying) schools.

NEXT ARTICLE →
One in eight people experience violence at work, says TUC