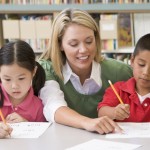 The summer holidays may be approaching but if the UK jobs market is anything to go by, schoolchildren may not escape the classroom for long as demand for summer teachers soars.

That’s according to job site Indeed, which has found that summer teachers lead the way as the nation’s top short-term role for the coming weeks.

This reflects a growing market in the UK for summer tuition, alongside more typical summer schools which are activities-focused.

The trend demonstrates how the jobs market can behave; while regular teachers are enjoying some well-earned time off, there are chances for others to fill their shoes.

Also ranking highly in the summer job ranks are ‘summer associates’ – which are typically intern-type roles in fields like sales, finance and law – and outdoor jobs working with children, such as demonstrators, activity leaders and coaches.

The share of postings for summer jobs has reached an all-time high on Indeed, with patterns of previous years suggesting that the peak is yet to be reached. Historically, the highest number of postings on the site for these positions comes at the end of June but the levels reached by the end of this May outstripped the 2016 and 2017 peaks, which both came a month later.

Year on year, there is a 14% rise in this year’s May figures compared to last, taking 2018 above 2017’s June peak already, with high probability of further growth. Service industry jobs such as server, chef and brand ambassador also feature in the top 10 list, while reception work is also sought-after, likely as holiday cover while regular employees enjoy some annual leave.

Tara Sinclair, economist and senior fellow at Indeed, commented: “We all enjoy the idea of summer holidays but the reality is that the world doesn’t stop just because the sun comes out, and the growth of the UK’s summer jobs market shows this.

“Six weeks, or in some cases two months, is a very long time for children to be inactive so it is perhaps unsurprising to see demand for summer teachers so high, as parents look to give their offspring a boost ahead of the new school year. It is also interesting to note that many of these jobs are for Teaching English as a Foreign Language (TEFL), with a growing market of overseas students visiting the UK for language holiday courses – creating a healthy pocket of opportunities for TEFL-qualified teachers.

“That said, it is not all work and no play, with opportunities for more outdoorsy and activity-based jobs also ranking among the most posted jobs. And for students looking to earn some extra cash, there are plenty of short-term roles in offices on offer – in fact, the best news for jobseekers is that the number of opportunities for summer jobs has never been higher, and will only keep climbing as the holidays approach.”